This article is about the playable character. For the boss, see ??? (boss).

???, also known as The Blue Baby, is an unlockable character in The Binding of Isaac. He is unlocked by completing the full game 10 times (defeating Mom's Heart), after which Isaac will find him locked in a chest during the ending cutscene.

??? is unique in that his health is made entirely of Soul Hearts and cannot be expanded with Heart Containers. This makes Soul Hearts the only source of replenishing health available to ???; standard hearts cannot be picked up and will remain on the ground as if the player is at full health. Items in the Devil Room will always cost three Soul Hearts while playing as ???.

If you beat the boss in The Chest as a different character, but die afterwards (let the chest spawn, and then die) with the Ankh item, you'll respawn as ???. Completing the level will count as beating it as ???, giving you his Chest achievement, but still unlock the character specific item. If you are a different character that dies while they have the Ankh, they will respawn as ???. Besides if you have no "red hearts" if you beat The Chest (by deals with the devils for instance) and only soul hearts, the game consider that you're ??? and the character you choose, so you can unlock ???'s award and the chosen character's award.

Items that have reduced/no effect

Due to the way the game counts "completions", players need only beat any of the endgame bosses—It Lives, Mom's Heart, or Satan—a combined total of 10 times to unlock ???. Since it is possible to defeat both Mom's Heart/It Lives and Satan in the same playthrough, ??? can be unlocked before the player has actually completed the game 10 times. However, defeating Satan requires accessing Sheol, which prior to unlocking It Lives requires either We Need To Go Deeper! to be used or for a Devil Room to be accessed after defeating Mom's Heart, neither of which are guaranteed to be available.

??? as seen on the Boss Battle Screen 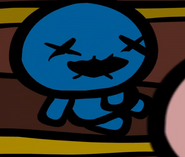 ??? cameo appearance in the 10th ending.

??? as seen on the Secrets Panel 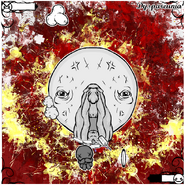 Notice the dead blue baby thrown away by the cunt during its dyspareunia stage. From C-Word, one of Edmund McMillen's earlier games.

The screen that appears when Blue Baby is unlocked.

Another part of the thirteenth ending.

Playing with ??? is a challenge, but his drawback also comes with upsides. His main gimmick relies on exploiting health based items or rooms.